Jiangrong Ouyang, The University of Melbourne

The Chatham Island black robin is an endangered bird species that lives on a small island 800km off the coast of New Zealand. By 1980, the population of black robins had declined to five birds, including only a single successful breeding pair. After an intensive human intervention, the population grew rapidly to 197 adults by 1998. However, the population growth slowed considerably and it only reached about 250 adults in 2014. Many biological populations experience a logistic growth, that is, the population per capita growth rate decreases as the population size approaches a maximum imposed by limited resources in the environment, known as the carrying capacity.

This project was inspired by the slowing growth of the black robin population. To understand how the population evolves, we first studied population-size dependent branching processes, and then developed parameter estimation methods to fit these models to the black robin population. However, the models and parameter estimation methods can be applied to any species that experiences decrease in growth rate due to the limited resources in the environment.

During this project, I learned many research techniques in the fields of probability and statistics. It also changed my impression about academic research. Instead of spending the whole day on a desk with piled paper, it is more important to communicate with other like-minded researchers. Thanks to Dr. Sophie Hautphenne and Mr. Peter Braunsteins, who prepared the project, “Stochastic models for populations with a carrying capacity”. It is a great honour to do research under their supervision. I would also like to thanks my group mate, Alan Guo, who is very supportive when I was lost in the middle of nowhere.

At last I would like to thank for the financial support from AMSI via vacation scholars program. 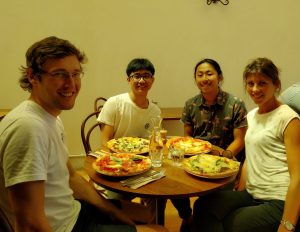 Jiangrong Ouyang was one of the recipients of a 2017/18 AMSI Vacation Research Scholarship.