Public health is all about keeping a population happy, healthy and alive.

But what if we have a behaviour that is both risky and prevalent in the population? That’s where we find the Population Attributable Fraction (PAF) to be a useful measure. PAFs quantify the benefit of a behavioural change at a population level. Let’s demonstrate this with an example:

How many fewer deaths would there be if smoking was never invented?

Take a look at this graph which represents some imaginary population. We’ve classed the population as non-smokers, former smokers, light smokers and heavy smokers, and you can see the proportions down the bottom. The height of the bars is a measure of how risky each behaviour is. (In this case, this measure is a “hazard ratio”, which is the relative rate of death for each category.) At the top of the bars, we can see how many deaths there were in each category over ten years. In total, accounting for all categories, our population had 60 deaths. 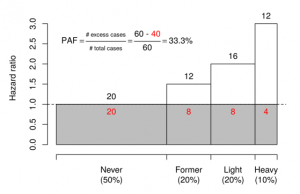 Now let’s pretend that smoking was never invented, and no one in our population ever smoked. How many deaths would happen in this case? If everyone adopts the same risk as those who had never smoked, then we see that there would be 40 deaths instead of 60. These deaths are represented by the grey parts of the bars.

A PAF is the ratio between the number of excess cases and the total number of cases. In this contrived example there were 20 excess cases, which are represented by the parts of the bars that are white. We know that there were 60 cases in total, so that means that PAF is 33.3%. What does that mean? Simply enough, we can attribute one third of these deaths to smoking.

It has been my aim to estimate PAFs for any generic cohort study. We’ve been interested in the effect of smoking on death, and the effect of BMI on diabetes incidence, and there are so many directions we could take.

This is just a brief foray into what PAFs are about, and there are many other topics to cover. I have enjoyed my time trying to make PAFs more accessible to others, and I am glad to contribute to public health research.

After all, I like being happy, healthy and alive.

Ian Powell was a recipient of a 2018/19 AMSI Vacation Research Scholarship.