Hi, I’m Steven! I did a research project about creating a mathematical model to describe disease behaviour, in terms of how they spread and affect populations of humans and other animals (including those who spread it!). Specifically, I looked into a case study of a dengue fever outbreak in the Cape Verde Islands, Africa in 2009. Dengue fever is a nasty disease that is anthropogenic (originating from humans), but can be spread via blood transfer. Therefore mosquitoes are the number one reason why this disease can pick up momentum and spread quickly!

Those scientists studying diseases and trying to help prevent major devastation could really benefit from using a model that can predict how the disease will behave given some conditions of the specific situation and how adjusting one aspect will change the whole epidemic behaviour. That’s where the maths comes in! I have built upon some pre-existing methods to develop a more effective method to model epidemics. I increased the number of parameters in pre-existing models and used parameter estimation techniques (by comparing my model to some real data, and slightly adjusting the model to fit better, repeating this process 1000s of times) to estimate all those parameters. This took six hours to run on my computer, but the results were worth it! It came with some good and some bad. The model I generated fitted the real data very well, but the trend of previous models were better at an overall prediction. My model had issues in particular places, but fitted the data much better around the middle and end. Below are some pictures of the results; mine is the last one. (From left to right, top to bottom.) 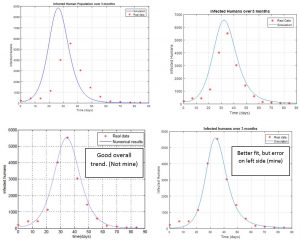 Steven Kedda was one of the recipients of a 2017/18 AMSI Vacation Research Scholarship.