Water contamination is an important environmental problem as when contaminants come into contact with rivers and lakes, they render water supplies unsafe for consumption by humans and animals alike. There are many ways water supplies can be contaminated. One way is when contaminants soak into soil from the ground surface and come into contact with groundwater. Groundwater refers to the water present in the pore space of soils below the ground surface and it is important to determine the fate and transport of contaminants within the groundwater. This can be achieved using a mathematical model.

This research project considered a contaminant transport model that described how contaminant concentration in groundwater changes with space and time. The model involved the advection-dispersion­ equation. More simply, this equation describes the flow of contaminants by modelling the movement and speed of the contaminant as it spreads through the soil. Normally, these models are solved for the full transient solution, which is the concentration of the contaminant at all points in space and time of the system. However, managers of groundwater resources are often only interested in the breakthrough curve, the concentration history at a single spatial location where a river or lake is located.

The aim of the project was to extract insight into the behaviour of the breakthrough curve without having to solve for the full transient solution by using temporal moments, which characterise the shape of the curve. In particular, our research considered the concept of steady state time. For our model, the steady state time is the time required for the contaminant to be completely removed from the system. Our goal was to relate the steady state time to the moments to develop a simple formula to compute the steady state time without requiring the transient solution. In particular, we showed that the steady state time is well described by an appropriate linear combination of the moments. Using this relationship, we explored how the velocity of the contaminant affects how quickly it is removed from the system. The results showed that the contaminant is removed quicker from the system when the velocity is higher as expected intuitively and as shown in the accompanying figure. In the future, it would be interesting to extend this research to explore more realistic conditions to see what useful insight could be gathered from the models that could assist in handling the problem of groundwater contamination. 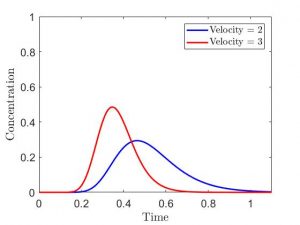 Ryan Watson was a recipient of a 2018/19 AMSI Vacation Research Scholarship.