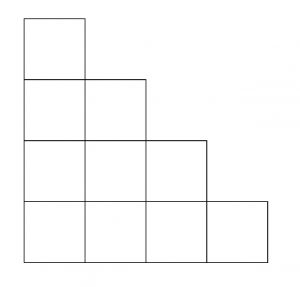 One variation on the idea of partitions comes from limiting the size of the largest part of the partition. For example, as we saw above there are five partitions of 4, but only three of which contain no part greater than 2. This can be visualised with young diagrams as well, by limiting the height of the columns.

Now let n be arbitrary. Consider every partition of n into at most p parts and their associated young diagrams. Remember this means that the young diagrams consist of at most n columns. Now take all of these young diagrams and take their conjugates. Since the rows and columns have swapped, the longest column is the length of the longest row before the conjugation, but the longest row can’t be longer than the number of columns which is p. Thus the columns of the conjugate diagrams can’t be taller than p. But then these conjugate diagrams correspond to the partitions of n in which the largest part is not greater than p. And since there is a one-to-one correspondence, there must be the same number.

Sean Malcolm was one of the recipients of a 2017/18 AMSI Vacation Research Scholarship.