Tienhe Xie, The University of Melbourne 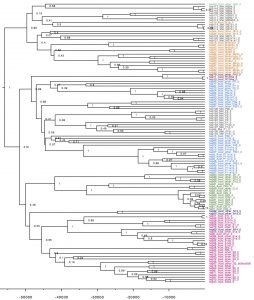 As indigenous Australians are often said to be the oldest continuous culture in the world, the study of their population history is important and can provide insights about early human evolution.

Last year a paper titled ‘Aboriginal mitogenomes reveal 50,000 years of regionalism in Australia’ was published in Nature, using data collected by the South Australian Board for Anthropological Research between the 1920s and 1970s and some previously studied results. Based on analyses of mitochondrial DNA and the corresponding geographic origins, the paper argues that indigenous Australians have remained in discrete geographic locations for close to 50 thousand years. Given the importance of these claims, we decided to investigate how well they were justified by the data presented. The statistical analyses in the paper were a phylogenetic analysis and Mantel tests.  We repeated both of these analyses to help us evaluate the claim of long-term regionalism.

The phylogenetic analysis was conducted by software BEAST which generates an optimal evolutionary tree, a branching diagram in which the branching times are estimates of the times of common ancestors of different genomes. BEAST is Bayesian software that can be used to take aligned mitochondrial DNA genome data as input and apply various models and prior knowledge of evolutionary parameters to calculate the posterior probabilities of both parameters and evolutionary trees, which are then used to output an approximately most probable tree.  The Mantel test is a test of zero correlation between two sets of distances between individuals: here the distances are genetic and geographic.  In the paper, the Spearman correlation coefficient was calculated, which is based on comparing the rankings of each distance.

In our project, we generated two phylogenetic trees for data kindly provided by the first author, Dr Tobler. The resulting trees are found to be unstable by showing variation in topology and timing of mutation events over repeat runs with the same prior choices as specified by the paper. We then performed Mantel tests for all dataset and different genetic subgroups. Since we have already conducted the phylogenetic analysis, we chose to define the genetic distance as time to the common ancestor between two genomes extracted from the tree. This definition is different from that in the paper, allowing us to compare the results and investigate how much variation can be induced. Each test was repeated for sensitivity test by inputting three different phylogenetic trees, two that we generated and one provided by Dr Tobler that is published in the paper.

After re-evaluating the available genetic data following the procedure above, we concluded that the claim in the paper is not sufficiently substantiated by these analyses. Alternative models with more data should be considered for future study.

Tienhe Xe was one of the recipients of a 2017/18 AMSI Vacation Research Scholarship.