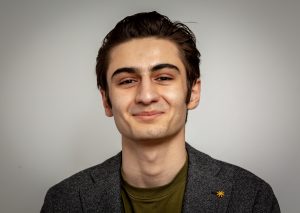 Amir Farid Kaveh, born in Tehran, Iran, began studying Physics as part of the University of Melbourne Extension Program (UMEP) in 2015. In 2016 he was admitted into the Bachelor of Science where has since been studying Physics with a concurrent diploma in Mathematical Sciences.

Particular areas of interest for him are Complex Systems, Econophysics and Quantum Computing.

In this project we will be looking at the possibility applying multidrug therapy (MDT) to treat influenza A viral infections. While MDTs are already being employed to treat viral infections such as HIV/AIDS, they are yet to be seriously considered in the case of influenza A. The aim here is to adapt the basic TIV structure to model the effect of this type of combination drug therapy on the within host dynamics of the influenza A virus. There are two functionally different antiviral strains in use against influenza A today: neuramindase inhibitors and amantadine. While exploring the combination of these two familiar drug families, we will also consider MDT’s involving novel drugs that are yet to be realised.