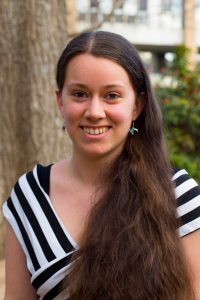 Jade Bujeya was born in Melbourne but educated in rural Victoria. She was very precocious as a child, and constantly told her parents she wasn’t learning enough at school. During VCE she took Literature, English, Media Studies, Psychology, French, Chemistry, and Maths Methods before attending La Trobe University, where she is currently taking a Bachelor of Science in Mathematics and Physics, and a Diploma in Languages Majoring in Advanced French.

She is a recipient of the La Trobe Vice Chancellor’s Excellence Scholarship, as well as the Freemasons Secondary Education award, and has maintained a weighted average mark of
above 80% since commencing her university education. This year she will be attending Sogang University in South Korea for six months on exchange, where she will continue her studies in both French and Mathematics.

This project uses geometry and topology to explore a topic in structural chemistry. There is a large class of different molecules which join together into a larger assembly in a way well
modelled as an embedded graph, e.g. atoms in space linked together by atomic bonds, or larger assemblies of atoms linking together at junction points. There is scientific interest in topologically non-trivial ways of embedding these molecules i.e. graphs containing knotted or linked cycles.