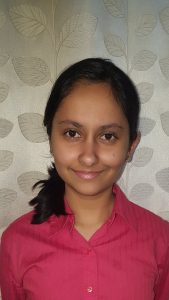 Kshitija has just finished her third year in a Bachelor of Science and Bachelor of Global Studies double degree at Monash University. She has completed a minor in Physics and is working towards her majors in Pure Mathematics and International Relations. Kshitija’s name was included on the Faculty of Science Dean’s Honours List for 2016 and she was also awarded a Chris Ash Prize in 2017 for Linear Algebra. This year, her passion for problem-solving led her to participate in the Simon Marais Mathematics Competition.

Throughout her undergraduate degree Kshitija has developed an interest in various areas of mathematics including group theory, ring theory and functional analysis. For the remainder of her degree she hopes to further pursue these areas and explore others. An aspiring researcher in Pure Mathematics, Kshitija intends to undertake an Honours year in 2020.
She is excited by the prospect of a research career because it involves uncovering beautiful mathematical truths.