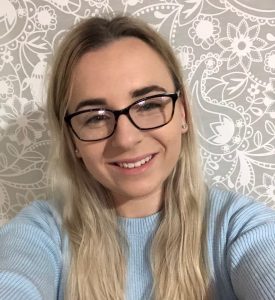 Michelle graduated high school in 2015 with the firm intention of becoming a veterinarian. One short year and piglet dissection later she realised that it was without a doubt not for her. She found her passion in mathematics through tutoring a fellow student in a discrete mathematics unit. In 2016 Michelle began her journey in an undergraduate degree majoring in Mathematics and Statistics at Murdoch University. One of her particular interests has been computational mathematics, leading her to add a minor in computer science to her degree. She has gained the utmost respect for her academic mentors and their work within the field, as they have inspired her to take part in the world of research.

My research project investigates the question ‘do discontinuous analogues of bicontinuous triply-periodic minimal surfaces exists?’. I will address this question through a
computational study that attempts to construct such a case. The project will comprise of establishing a particularly homogeneous point set using Lloyd’s evolution and Voronoi constructions. This will be followed by a randomised selection of two maximally intergrown subsets and a finite-element like surface area minimisation algorithm. The goal of the project is to test if this construction will lead to stable and effectively minimal surfaces, by testing convergence and mean curvature variations.