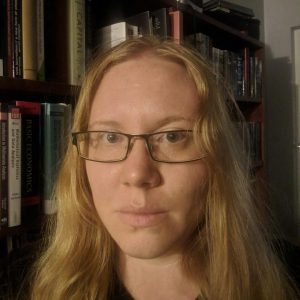 Theresa O’Brien is a student in mathematics and statistics at the University of Wollongong. She first began as a student of sociology and linguistics before expanding her repertoire to mathematics and statistics in her second degree. She is primarily interested in mathematical modelling in the social sciences, but also has a keen interest in applied statistics and some fields of pure mathematics such as algebraic topology and noncommutative geometry. Applications of these to social science are also of interest because, she believes, there’s no such thing as overanalysis.

A Giggle a Minute: Agent-Based Modelling of Laughter Propagation in an Audience

This project will investigate laughter propogation in a comedy audience through an agent-based modelling framework. Agent behaviour will be defined by a mixture of mathematical equations and stochastic processes in order to reflect the somewhat random, and intensely social, experience of comedy. Agents will be embedded in a weighted directed graph which represents people in spatial and social proximity through edge weighting, while the build up to a punchline, and the punchline itself, are environmental factors experienced by all agents at the same time.