What could be worse than running barefoot over scorching asphalt or forgetting the oven mitts when pulling out a freshly baked cake? In these unpleasant situations, we usually place the fault on the object being ‘too hot’, however the cause is actually a certain property of the material, called the thermal diffusivity. The thermal diffusivity describes how fast a heated or cooled material returns to thermal equilibrium, where a material with high thermal diffusivity transfers­­­ heat in a short time span, allowing the heat to travel deeper into the applied material. This explains why metal, with a larger thermal diffusivity, causes a deeper burn than plastic when pulled from boiling water. 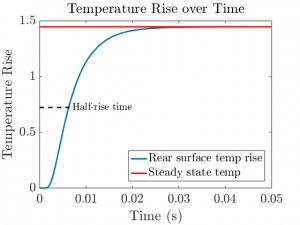 To verify the resulting formula, we generated synthetic experimental data to mimic a realistic laser-flash experiment (see Figure 2). The error between the experimental and theoretical thermal diffusivity values is shown in Figure 3, the blue and red histogram displaying the error from our method and the half-rise time method respectively.

Christyn Wood was a recipient of a 2018/19 AMSI Vacation Research Scholarship.