We might all feel like we have some idea exactly what curvature is but it is a surprisingly difficult concept to formalise. For instance you might think of curvature as something which tells us how much an object bends in each direction but this is not a very rigorous definition for it. This tells us nothing of what it might mean to bend in a particular direction or how it might be different to other parts of the surface. To illustrate what we might call something with positive curvature we have an easy experiment. First find any spherical object you don’t mind drawing on (this could be something like an orange/tangerine or perhaps a balloon) and a marker with which to draw with.

Mark out any two points on your object of choice and draw a straight line (that won’t immediately hit the other point) from both of these points. You may notice that as you extend these lines suddenly they start approaching each other until they finally meet. This is quite different from the standard geometry you will see in school as we know that parallel lines should never meet. This is only true for flat sections of surfaces like the plane, or the face of a cylinder. So we say that an object has positive curvature if it behaves like the sphere at some section of the surface and is flat if it’s like a plane. 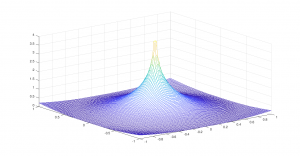 e curvature? We continue our experiment instead on shapes that appear to be like saddles, and find that as we trace out our straight lines they start to branch off from each other and get further, and further, away from each other. This is different to the flat case since the distance between the two lines is always increasing, not remaining stationary like in the flat case. An example of a surface with negative curvature everywhere is the pseudo-sphere.

This experiment is all well and good, but where exactly is curvature seen in higher level mathematics? Without going too in depth we shall focus on an application that initially seems to have nothing to do with curvature but is fundamental to this application. Say you wish to find and classify every possible surface which has minimal surface area (this has obvious applications in engineering and physics) how might you go about doing so? This problem goes back to the time of Lagrange (~1760), surprisingly the answer is that the curvature of the surface defines whether a surface is minimal or not. We call the average curvature in each direction the mean curvature and a minimal surface is equivalent to those surfaces which have zero mean curvature. This lets in some very strange examples of minimal surfaces for instance Costa’s surface.

So curvature is a really useful concept in both pure and applied mathematics, as it explicitly tells us something of the geometry of the surface we are considering, which is invaluable for areas like Differential Geometry and Geometric Analysis.

Lachlann O’Donnell was one of the recipients of a 2017/18 AMSI Vacation Research Scholarship.